“If I had simply asked people what they wanted, they would have asked me for faster horses!” — Henry Ford 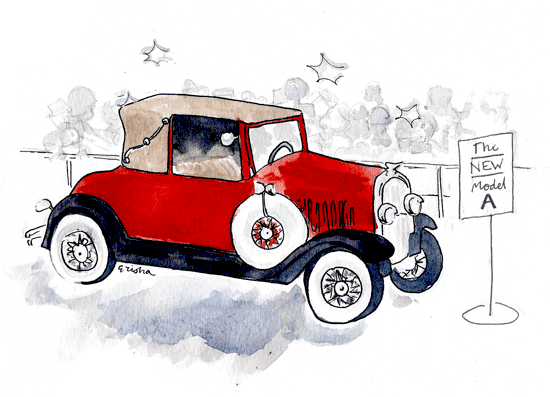 Eighty five years ago today the intrepid and amazing Henry Ford and his Ford Motor Company introduced the Model A to the world. We have been amazed and enamored over the past few years at the long lines when a new Apple product has been introduced. But we have only to look back 85 years to witness a product rollout far more impressive in scale and magnitude. [1]

Henry Ford was well known for his devotion to the Model T. It was his baby. It had made him a fortune, established him as a paragon of industry and, with his commitment to a pricing model people could afford, endeared him to the people unlike any other public figure of the day. He was keenly aware of this role and the fundamental part his invention had played in shaping American culture and providing a new level of joy for the American people. An incident from 1912 illustrates the magnitude of his devotion to his product.

Ford had been away on an extended trip to Europe and during that time his leading engineers and managers cooked up a little surprise for him. As engineers are wont, they had a deep desire to “advance” the design and thought Mr. Ford, when he saw their work, would be excited to broaden the product line. So they designed a prototype, a proposed successor to the Model T. It had four doors, was longer with more stylish lines, and was painted red. When Mr. Ford returned from his trip, one company manager described what transpired as Henry inspected the new vehicle.

He kept looking at it. He’d tip his head this way and that and look at it…. I said, “Is there anything more I can …?” “No,” he said. “I’m going over and look at the new car.” He kind of smiled…. He had his hands in his pockets and he walked around that car three or four times, looking at it very closely. It was a four-door job and the top was down. Finally, he got to the left-hand side of the car that was facing me, and he takes his hands out, gets hold of the door, and bang! One jerk, and he had it right off the hinges! He ripped the door right off! God, how the man done it, I don’t know! He jumped in there, and, bang, goes the other door. Bang, goes the windshield. He jumps over the back seat and starts pounding on the top. He rips the top with the heel of his shoe. He wrecked the car as much as he could. [2]

And so, company executives knew exactly where not to stray. The Model T would define the Ford Motor Company forevermore. Well, not exactly. By the mid-1920s the Model T’s appeal to the American public was waning and everyone in the industry knew it. Everyone that is, except the titular head of said industry. Company executives began a concerted campaign to win over Mr. Ford and finally, in the late summer of 1926, after literally years of tension and debate, Henry Ford gave in. A new model could be built.

The following year was filled with endless debates; Henry staunchly advocating for traditional features, and Edsel, his son, and president of the company, lobbying for modern innovations and contemporary styling. Many of the debates, when viewed in modern terms, seem comical today. For example, the new model could hit sixty five miles per hour and during one test run, the driver lost control and the car ended in a ditch prompting Henry to proclaim, “We can’t put that car out on the public! We’ll kill them all!” [3] Nevertheless, Mr. Ford relented on many innovations proposed by his son including the more powerful engine.

Finally, on May 26, 1927, the new car was announced. In Apple-esque style, few details were given other than that the new model would have “speed, style, flexibility, and control in traffic.” [4] While the Ford Company re-tooled their factories to build the new model, Henry began a carefully crafted and masterful public relations campaign previously unmatched in American history. He withheld almost every detail of the new vehicle, occasionally releasing tiny teasing tidbits but never announcing anything substantive. He also positioned himself as the public’s benefactor, a heroic and wise man of the people, defender of their interests.

By Thanksgiving the anticipation for the new car had reached fever pitch. For five straight days after the holiday, Ford ran full page ads in every English language newspaper in the country, two thousand in all. On December 2, 1927, the day had arrived and Model-A-mania gripped the nation. This was the event that everyone had been anticipating, like a Super Bowl of epic proportions or a new iPad rollout. But nothing has or possibly will ever compare to this event. The first day numbers were staggering considering the US population of 119 million. In Detroit, 100,000 people viewed the car on the first day. In Cincinnati there were 296,745, in Chicago, 514,096 and in the Kansas City area, an amazing 651,000. [5] This, despite the fact that many people had to be turned away. C.W. Doss, the Kansas City branch manager related the staggering event.

“It’s history – what a tremendous reception the Model A had. In Kansas City they literally broke the doors down to get in before it was time to open to the public. They pushed them right through. You couldn’t control that mob. There will never be another introduction like that; never was before. That was the story all over the country. It was tremendous, fabulous. The advance orders on that car were tremendous. They just ran over you to get one.” [5]

Estimates were that 10 million Americans went to a dealer to see the new vehicle in the first thirty six hours and 25 million in the first week. In other words, over 20% of the American population, 1 out of every 5 men, women and children in every city, town, village, and borough made it a point to see the new vehicle in the first week alone. And the new car did not disappoint. New innovations were everywhere; hydraulic shock absorbers, windshield wipers, new color schemes, theft-proof locks and safety glass. Perhaps more surprisingly, the new model continued the Ford tradition of affordability, costing no more than the Model T, with prices ranging from $385 to $570.

The introduction of the Model A was a signature event in American history. In many ways it was a high point of the decade with an industry magnate building a product of high quality at a reasonable price. And it was likely the most remarkable product rollout in history.